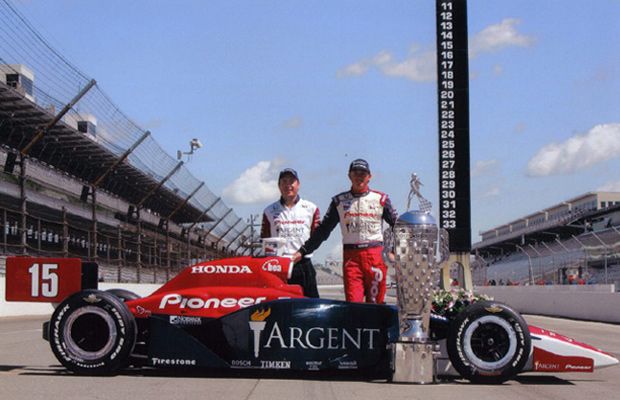 The 88th Indianapolis 500 was held at the Indianapolis Motor Speedway in Speedway, Indiana on Sunday, May 30, 2004. It was part of the 2004 IndyCar Series season and the ninth Indy 500 sanctioned by the Indy Racing League. Buddy Rice won the pole position, the pit stop contest, led the most laps, and won the race for team owners Bobby Rahal and David Letterman.

The race began about two hours behind schedule due to a morning rain delay. After 27 laps had been completed, rain began to fall again and threatened to wash out the rest of the day. About two hours later, the rain had ceased, and the track was dried. The race resumed on lap 28, and cruised beyond the halfway point to make the race official. At the 150-lap mark, the race had been very competitive up to that point, but was destined to come down to the final round of pit stops to decide the winner. Moreover, dark skies were looming, and inclement weather was moving back into the area. The race appeared to be turning into a crap-shoot. Some leaders headed for the pits for their final pit stops. At the same time, a handful of teams gambled by staying out, in hopes that they could stretch their fuel and be leading the race when the approaching rain arrived.

Despite desperate attempts to prevail over the approaching rain storm, all of the leaders ultimately were forced to cycle through their final round of pit stops. Nobody was able to stretch their fuel long enough to beat the rain. Buddy Rice, who had led the most laps thus far, re-emerged as the leader. The race was ended after 450 miles (180 laps), just 50 miles (20 laps) short of the scheduled distance. A severe thunderstorm, which eventually strengthened into an F2 tornado, formed in the area of the speedway, shutting the track down, and sending the spectators and competitors for cover. Buddy Rice was declared the winner, his first victory in championship-level competition.